Posted by Nicole on October 12

If you have been feeling down lately and have been looking for a natural answer, your healthcare professional may have mentioned St. John’s Wort to you. This supplement is commonly used to enhance mood. Some people also take it during menopause.

How does St. John’s Wort produce its effects? Research into this powerful herb is ongoing, but we do know a few of the mechanisms through which it appears to boost mood. As you will discover, it is quite a fascinating and unique supplement. 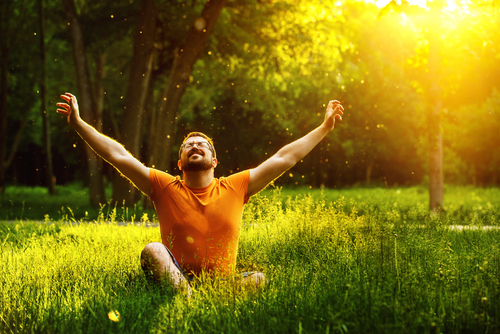 In other words, it enhances all three of these neurotransmitters without favoring one over another.

Why is this noteworthy? Well, if you have been looking for a way to bring more balance to your body and mind, you may have already discovered that the roles of neurotransmitters are complex, and that it can be difficult to achieve the balance you are after

Many medications and supplements work only on enhancing one neurotransmitter or another. In some cases, this may be what you are aiming for, but in others, it may be unsuitable.

What is also intriguing about St. John’s Wort is that it also displays further mechanisms of action. Marilyn Sterling, R.D. explains, “The most neuro-active component of St. John's wort, hyperforin, inhibits the neuronal uptake of many neurotransmitters, therefore increasing their effective activity. Hyperforin increases the effectiveness of norepinephrine, dopamine, L-glutamate, and gamma-amino butyric acid (GABA), as well as serotonin. Researchers in the Department of Pharmacology at the University of Frankfurt in Germany concluded, "no other antidepressant compound exhibits a similar broad uptake-inhibiting profile."

Sterling states in that same paper that the popularity of SSRI medications in the treatment of depression has brought a lot of attention to serotonin’s role in mood disorders. But as she elucidates, “depression is a complex systemic illness involving multiple neurotransmitters, hormones, and the immune system.”

So, the fact that St. John’s Wort is able to impact not just serotonin, but dopamine, norepinephrine, GABA and L-glutamate may make it the herb of choice for many people in search of a natural supplement for mood enhancement.

But it is important to also be aware that this broad spectrum of action may increase the number of possible drug and supplement interactions in which St. John’s Wort may be involved.

In fact, there is quite a long list of interactions to be aware of. So if you are taking other supplements or herbs, you will want to review the full list before you give St. John’s Wort a try.

You now have a stronger understanding of the mechanisms through which St. John’s Wort impacts mood and other aspects of health. Like many other herbs, you will get the best results from St. John’s Wort if you are consistent in taking it each day and you give your body a few months to fully adjust.