Posted by Nicole on April 7 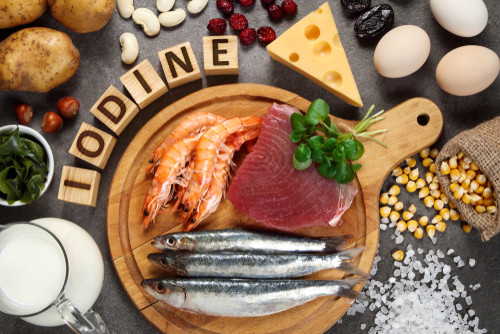 How Prevalent is Iodine Deficiency?

According to this paper, around 2 billion people around the world have iodine deficiency. Of those 2 billion, around 50 million “present with clinical manifestations.”

Again, depending on where you live, you might imagine that iodine deficiency is likely to be someone else’s problem. But the American Thyroid Association says, “In the United States, iodine status has remained generally adequate in since the 1940s although studies have shown that urinary iodine levels dropped by about half between the early 1970s and the early 1990s, and most recently mild iodine deficiency has re-emerged in pregnant women.”

Why is iodine deficiency so common in the US? Part of it could be that you can’t see how much iodine is in the food you are buying since the labels do not list it. Another aspect could be the popularity of non-iodized salt (i.e. sea salt).

What are the Consequences of Iodine Deficiency?

If you fail to get sufficient iodine, it can result in enlargement of your thyroid. You  might get a goiter or develop hypothyroidism.

It is extra important to get enough iodine if you are pregnant. Without sufficient iodine, it is possible to miscarry or have a stillbirth. Preterm deliveries are possible as well, and some children may be born with congenital abnormalities and intellectual disabilities.

How Can You Get More Iodine?

As an adult, you should be aiming for 150 μg of iodine each day according to the guidelines set by the Institute of Medicine.

Some foods that contain iodine include cheese, eggs, milk, ice cream, frozen yogurt, yogurt, soy milk, soy sauce, seaweed, shellfish, and fish. You can also add iodine to whatever meal you are preparing by using iodized table salt. Again, sea salt does not contain iodine. So, if you are only using sea salt, you are not getting your iodine. It is okay to use sea salt sometimes, but you will want to make sure iodized salt is also a regular part of your diet.

One other thing you can do is to take iodine supplements. You can find iodine supplements in isolation, or you can find them in combination with other vitamins, minerals, and herbs. For example, you might consider taking a supplement for thyroid support that combines iodine, selenium, vitamin D, vitamin E, vitamin B-12, zinc, L-Tyrosine, and other healthy ingredients.

Now you know more about the importance of iodine. With billions of people around the world suffering from iodine deficiency, including in first world countries, it is important to take stock of your daily iodine intake. Even if you are not deficient, your levels could be suboptimal. Try eating more iodine-rich foods and iodized salt, or consider taking an iodine supplement to protect your health.