Posted by Nicole on June 3

Feeling overwhelmed lately? While looking for ideas for how to manage your stress, you may have run into mentions of herbs called “adaptogens.” But what exactly are adaptogens, and can they help you? 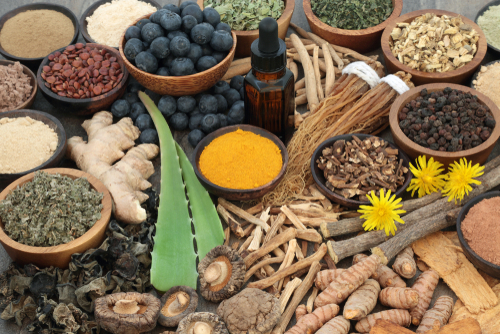 We can turn to Dictionary.com for a simple definition of adaptogen: “Any of various natural substances used in herbal medicine to normalize and regulate the systems of the body.”

Basically, an adaptogen is supposed to help you return to homeostasis when you are under stress.

You can find reference to adaptogens in scientific research studies. But there is some controversy over the classification. Indeed, the European Medicines Agency (EMA) is not impressed with the concept, and does not permit products to be marketed as “adaptogens” in the EU.

So, adaptogens do exist. But not everybody agrees yet on what they should be called or on what they can and cannot do in the human body.

What Are Some Examples of Adaptogens?

Some herbs that are marketed as adaptogens include:

Those are just some examples. There are other types of herbs that also are marketed as adaptogens.

Are Adaptogens Backed by Research?

There is some research out there that provides support for the efficacy of adaptogens. For example, this study even discusses some of the mechanisms at work, stating, “The beneficial stress-protective effect of adaptogens is related to regulation of homeostasis via several mechanisms of action associated with the hypothalamic-pituitary-adrenal axis and the control of key mediators of stress response.”

Here, you can view a meta-analysis that reports, “Strong scientific evidence is available in relation with the molecular mechanisms associated with their stress-protective activity against acute and chronic paradigms.”

Keep in mind, however, that the European Medicines Agency has still not been persuaded of the benefits of adaptogens. So, there is some controversy still over the quality of studies and the weight of the evidence.

Do Adaptogens Have Any Drawbacks?

Based on the findings of some of the studies that are out there as well as anecdotal reports from users, taking adaptogens may be beneficial for dealing with stress. But are there any potential drawbacks to be aware of?

Adaptogens may cause side effects for some users, especially if taken in high doses. Start with a low dose if you are going to try any new supplement, and increase to a higher dosage if you react well to it and think a higher dose may bring you greater benefits. Never exceed the maximum safe dosage for adaptogens or any other supplements.

How Do You Take Adaptogens?

Adaptogens usually come in capsule form. So, to take them, you just need to swallow the appropriate dose. You can check the instructions to find out how many capsules to take at a time, and how many times of day you should take them.

You might want to take your supplements with food and water. Whether you need to or not will again depend on the product you have chosen.

How Do People Choose Which Adaptogens to Take?

With so many different adaptogens on the market, you might be wondering how you choose the one that is right for you.

One idea is to research various adaptogens. See what they have been used for in studies, and at what dosages. You might also want to see if you can find out about the specific mechanisms and documented effects of each. Then, consider whether or not they might be a fit for your needs.

Alternatively, you can always just try taking one of the adaptogens that are popular, like Ashwagandha. Remember to let your primary care provider know about any new supplements you are taking.

Now you know more about adaptogens, herbs that are said to help fight stress. Research into adaptogens so far is inconclusive, but many people swear by these herbs. Hopefully as time goes on, more studies will shed additional light on the possible benefits of these traditional remedies.

We know times are tough right now and want to help! Enter your information below to get 25% off any order of 2 or more items. You'll love our supplements, we promise!