Posted by Nicole on December 9

With something as straightforward as staying hydrated, you would think it would be pretty hard to make mistakes. Alas, that is not the case. In fact, dehydration mistakes are common among not just athletes, but the general public. Below, we go over some mistakes that you might be making as you try to stay hydrated every day. 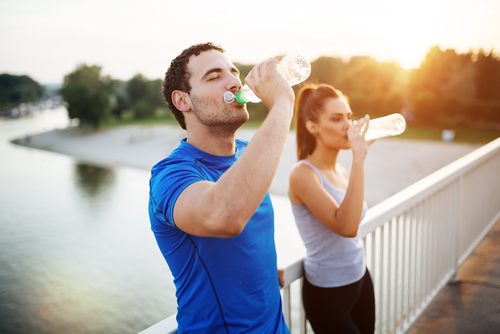 Okay, the first big mistake is the most basic one, which is not drinking enough water. But it bears emphasizing because it is so widespread.

The New York Post reports, “The average American is drinking only half the recommended amount – consuming just five glasses a day.”

Apparently a lot of people simply forget, especially when they are super busy. So, make yourself some reminders if you need to.

Runners World says, “We know a diet high in sodium can lead to serious health conditions like chronic high blood pressure. But that doesn’t mean salt is always the enemy. Salt losses vary greatly based on sweat rate, but many runners lose an average of one gram of sodium per liter of sweat, making salt a key player in keeping you hydrated. Hot and sweaty conditions mean replenishing your fluids and sodium levels is even more important.”

In fact, if you drink a lot of water without replenishing salt, you can make things worse. Gundersen Health System says, “Drinking too much water, can cause the electrolyte levels in the body to get out of whack and cause sodium levels plummet.”

We have all heard we are supposed to drink eight 8-ounce glasses of water a day. But is that true? Megan Schimpf, M.D. explains here, “There is no medical evidence that drinking that much water is beneficial to your health.” So, consider drinking more or less than that amount, depending on your body and activities.

Forgetting to replenish potassium, magnesium and other key electrolytes is another common mistake when you are trying to stay hydrated. A great way of getting more of these electrolytes is to boost your intake of fruits and vegetables.

5. Thinking just because you are not thirsty, that means you are hydrated.

While it is wise to listen to what your body needs rather than following a rule like “eight glasses a day” to the letter, that can be hard to do. Sometimes, you may not feel thirsty at all, but you could actually be dehydrated.

So, what signal should you look at to determine whether you need water or not? Try going to the bathroom and seeing what color your urine is. If it is light yellow or clear, you are probably adequately hydrated. If it is dark, you might need to drink something.

Now you know some common mistakes that people make when it comes to hydration. Drink the amount of water that is right for you each day based on your individual needs. Get plenty of salts and electrolytes along with your fluids, and remember to make adjustments as needed when your activities change.

We know times are tough right now and want to help! Enter your information below to get 25% off any order of 2 or more items. You'll love our supplements, we promise!